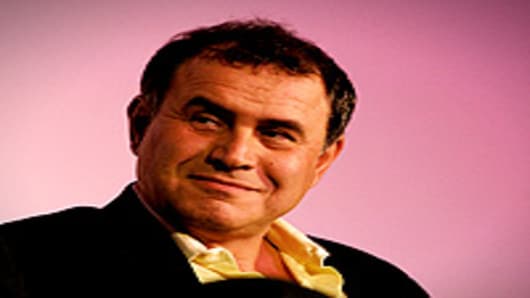 Municipal debt is up to 20% of GDP, he told me exclusively. And unfunded liabilities of state and local pension funds? Those are as high as $3 trillion — another 20% of GDP. So, basically, get ready — especially in Q1 when states can no longer use federal money to plug their budget holes.

“The issue is whether the Federal government will bail out state and local governments with a federal guarantee of their debt,” Roubini told me, likening the scenario to the money received by Greece and to be generalized to other Eurozone members in trouble via the new European "stabilization fund."

Some might call it the trillion dollar question: what will the government do if the states fail? This week I address that in my special series "States of Pain."

The possibility of states failing, is no longer a scary hypothetical. Roubini said that many US states are semi-insolvent. According to a report by the Center on Budget and Policy Priorities, forty-eight states addressed shortfalls in their fiscal year 2010 budgets, totaling $191 billion or 29% of state budgets — the largest gaps on record.

Famed banking analyst Meredith Whitney is worried about the same thing, and said so in an interview with CNBC last month. Towns and cities get part of their revenue from the states, and guarantee their own municipal bonds. Should the states start holding out on the cities in order to back their own debts, the cities might default on their municipal bonds, resulting in a vicious cycle of defaulting.

In the words of the California Governator Arnold Schwarzenegger during his unveiling of the revised budget for 2010-2011: "people have to hold on for dear life." So, strap in.