We've heard it before: Spain is too big to fail—and too big to be saved. 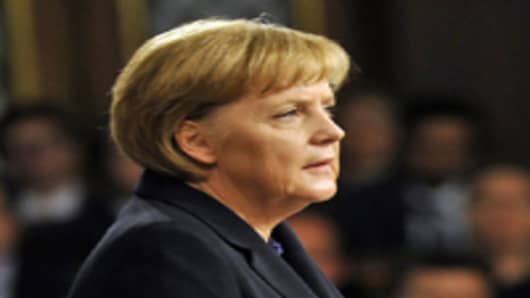 As I reported last month, Spain has €1 trillion of outstanding public debt.

Sovereign debt statistics, and their corresponding bailout numbers, can sometimes induce a drowsy numbness. Sure: €1 trillion—about $1.3 trillion—sounds like a lot of money.

Here is the takeaway fact, which can get lost in the noise: Spain has an economy twice the size of Greece, Portugal, and Ireland—combined.

I previously wrote about Nouriel Roubini's "domino theory"—how the collapse of sovereign debt in one eurozone nation could possibly trigger a cascade of national debt crises across the continent.

And about how the nightmare scenario could begin to unfold, with the Spanish domino smashing down, followed by a concussion wave of panic spreading through the financial markets.

Yesterday, Bloomberg News reported that Legal & General Investment Management, one of the largest managers of financial assets in the UK, would no longer lend money to Spain—at least not until the European Central Bank "takes the lead"—and starts buying Spanish bonds. (Presumably, in high volume.)

Bloomberg is also reporting that the European Central Bank is actively buying bonds from Ireland, Portugal, and Greece.

The European Central Bank, however, is not purchasing Spanish bonds at this time.

The article cites the source of the disclosure as "traders with knowledge of the situation who declined to be identified because the transactions are confidential".

Not surprisingly, the spreads between Spanish sovereign debt and German bunds is widening— as investors demand more yield to compensate them for assuming greater credit risk.

Divisions over a proposed eurobond are, perhaps, the most salient example of the disaccord.

Jean-Claude Trichet, president of the European Central Bank, lays out the case for Eurobonds in an article published in The Financial Times this past Sunday. Trichet recommends the introduction of "European sovereign bonds, issued by a European Debt Agency" in order to "send a clear message to global markets and European citizens of our political commitment to economic and monetary union, and the irreversibility of the euro." Whether his statement contains an implicit allusion to the reversibility of the euro—in reality or in popular perception—is subject to debate. Nonetheless, in reference to the creation of the proposed European Debt Agency, he observes, rather ominously, "Time is of the essence."

Not surprisingly, the euroubond proposal is likely to win support from nations likely to benefit from greater central funding—like Spain—and, of course, has already generated opposition from Germany, among others.

In defense of the euroubond, Portuguese Treasury Secretary Carlos Pina said "Europe's monetary union is missing solidarity mechanisms between countries and we consider that the mechanisms are insufficient." In turn, German ECB board member Juergen Stark frostily observed that "each country needs to be held responsible for its own debt".

BBC also reports, unsurprisingly, that: "There were similar divisions over whether to increase the bail-out fund, the European Financial Stability Facility."

The IMF—among others—supports the idea of increasing the size of the European Financial Stability Facility.

BBC News characterizes the IMF position this way: "a bigger pot would dispel fears that there wouldn't be enough resources to help Spain if it cried out for help."

The question is: Can it be enough?