A large tax refund may feel like free money. It isn't.

This year about 7 out of 10 taxpayers will get some money back from Uncle Sam.

Early bird filers who submitted their returns when tax season opened Jan. 29 may get their money in the coming weeks.

Many tax refund recipients plan to put that money to work.

About a third of taxpayers getting a refund expect to save or invest the money, while nearly 3 in 10 will pay down debt, according to Bankrate.com.

Here's the bad news: If the IRS sends you a huge check this spring, it means you've likely overpaid on taxes throughout the year.

"A large refund from the IRS may seem like an advantage, but it isn't the best or most effective use of your cash flow," said Tim Steffen, director advanced planning at Robert W. Baird & Co.

"You're basically giving the IRS an interest-free loan," he said.

If you're an employee, your employer gave you a Form W-4 when you were hired, which you can adjust to make sure the right amount of income tax is withheld from your paycheck.

On the form, you'll make note of your spouse, your dependents and your filing status; these are your "personal allowances." The more allowances you have, the less tax will be withheld.

"Some people read the form and think, 'I'm married and have three kids,'" said Cari Weston, director of tax practice and ethics at the American Institute of CPAs. "They end up with five allowances and owe substantial taxes at the end of the year."

To make things more complicated, the IRS is making internal tweaks to reflect the changes from the Tax Cuts and Jobs Act. The agency released new withholding tables, which take effect this year.

The IRS is also working on a calculator and a new Form W-4 to help you figure out the correct withholding based on the new tax code.

Use your 2017 tax return to get an idea of how much you ought to withhold this year.

To ensure that you avoid a penalty for underpayment of estimated taxes, you should aim to pay in 2018 at least 100 percent of the prior year's liability, said Jeffrey Levine, CEO and director of financial planning at BluePrint Wealth Alliance in Garden City, New York.

watch now
VIDEO1:3801:38
People are waiting for their tax refund check to take care of their health
Digital Original

This doesn't mean that you won't owe in April 2019. Rather, it means the IRS won't charge you the penalty and interest next year for coming up short on your taxes.

"If you see your tax rate increase substantially, you might owe a larger amount over the withholding," said Levine. "Aim for that 100 percent: It's a better method of avoiding the underpayment penalty."

Here's how to evaluate your withholding and make sure it's just right for you. 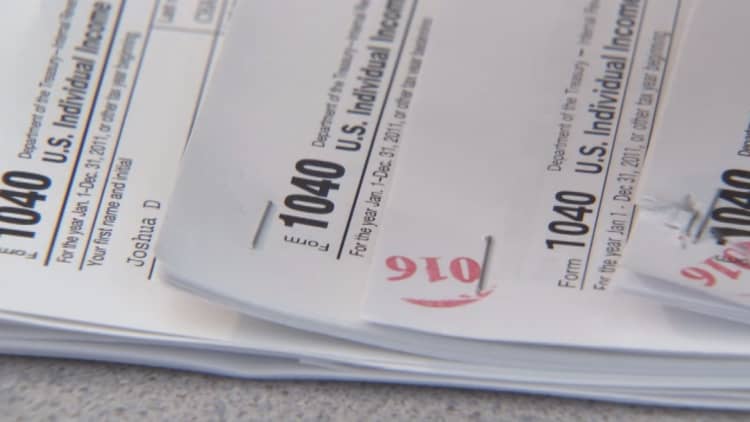