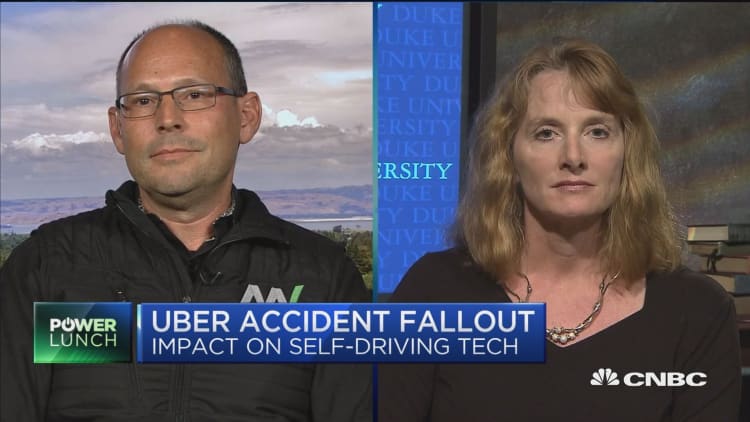 Driverless cars need to pass an acceptable set of standardized tests before they hit the road, said Mary Cummings, a professor in the Duke University Pratt School of Engineering and director of Humans and Autonomy Laboratory and Duke Robotics.

"You would never go to an airport and fly in an airplane with a brand new [automated landing] system that had never been tested before," Cummings told CNBC on "Power Lunch" Tuesday.

Cummings, who said she is "pro technology," argues that the same guidelines should be in place for self-driving cars, which she said are "unquestionably unsafe" and "deeply flawed" with gaps in computer vision and sensor fusion software.

"We certify and license humans by checking their vision," the robotics expert said. "I have been advocating for some time that these cars need vision tests. What I'm not advocating for is to put these cars on public streets and use the public as guinea pigs testing these technologies."

On Monday, Uber halted self-driving car tests after the first known death of a pedestrian. A 49-year-old woman in Tempe, Arizona, was walking outside of a crosswalk when she was hit by an Uber car in autonomous mode, according to Tempe Police.

Currently, there are no state or federal regulations around how driverless cars are tested, Jason Levine, executive director at the Center for Auto Safety, told CNBC on "Closing Bell." Levine said the technology is "moving way too fast."

But Jim Scheinman — founding managing partner of Maven Ventures, which invests in consumer, mobile and internet sectors — said driverless cars will save lives, reduce traffic and improve the efficiency of society.

"People who can't drive today: … the blind, … the elderly who live into the 80s, 90s, 100s," and others will benefit from autonomous cars, Scheinman said on "Power Lunch."

Scheinman, who invested in Cruise Automation, a California start-up that was sold to General Motors for $1 billion, said automated car technology should move quicker. He estimates millions of lives will be saved from the technology.

"In the next 24 hours we're not going to talk about the 100 people who have been killed on the road from human error," Scheinman said, referring to the death of the Arizona woman by an autonomous car.

Bob Lutz, former vice chair of General Motors, agreed to both points: the technologies for driverless cars "aren't quite yet where they need to be," he said, including issues with software and digital precision mapping. But, when the technology is up to speed, Lutz said, it will prevent needless fatalities. He estimates that autonomous vehicles will have about 5 percent of the accidents that human drivers have.

"Human drivers are distracted," Lutz said on "Closing Bell" on Tuesday. "They go to sleep. They drink. They text. They take drugs, etc. ... Autonomous vehicles do none of that."

Lutz said autonomous vehicles will still be responsible for some deaths but argues it will be significantly lower than the number caused by human-driven vehicles.

"We can't lose sight of the fact that autonomous vehicles are coming," Lutz said. "It's the only solution for surface transportation within large metropolitan conglomerations."

In fact, General Motors plans to release in 2019 the first batch of the Chevy Bolt, a self-driving car with no steering wheel, which Lutz "guarantees" will be safe.

While both Lutz and Scheinman said the death of the Arizona woman was tragic, Scheinman said, "The industry at large shouldn't be punished."

"There are standards in place," he said. "Those standards are going to be tested and improved. We think the right thing to do is to test this in controlled environments and put safety first. It's the way we're going to move forward to get to market."

The promise of what autonomous cars can deliver is amazing, said Levine, but he stresses that the technology is in the distant future.

"There needs to be a focus right now on the available safety technology, as opposed to this race to see Ford delivering pizzas in Miami or this Tempe and Chandler, Arizona, race to do ride sharing, when there are Uber and Lyft drivers right now," he said. "Let's get the technology right before we're using human beings as guinea pigs."