Jenny McCarthy may be best known for her co-hosting gig on "The View" or even her days as a Playboy Playmate.

Yet being an advocate for children with autism is by far her most important role, she says.

"My reason for being famous was to deliver this message," she told CNBC.

McCarthy's own son, Evan, was diagnosed with autism at two years old, which spurred her activism. She is the author of "Louder Than Words" and board president of Generation Rescue, a non-profit foundation dedicated to providing help to families affected by autism spectrum disorders.

Autism Spectrum Disorder, or autism for short, is a disorder that can affect how the brain develops. It's characterized by social challenges, difficulties in communication and behavioral issues, according to the Centers for Disease Control and Prevention. The effects can range from slight social challenges to severe cognitive impairment. 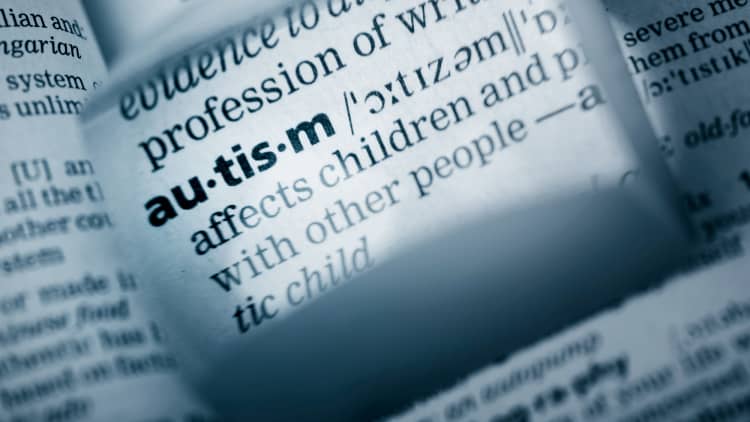 watch now
VIDEO1:4301:43
Scientists hone in on the risk factors that can cause autism
Modern Medicine

About 1 in 59 children are diagnosed with autism, according to an estimate by the CDC, a number that has grown significantly over time.

The diagnosis can be a source of severe emotional and financial stress on families. A 2014 study found that it costs $2.4 million to support a person with autism throughout the course of his or her life.

"I wake up every day and not only fear for my own child but for all of these kids," McCarthy, 45, said.

The actress and advocate has also drawn controversy by promoting the idea that vaccines may be linked to increased incidence of autism, an argument that has been scientifically unsubstantiated. (In the past decade, researchers have come a long way in narrowing down which factors do make autism more likely to develop.)

McCarthy talked to CNBC during trading firm BTIG's 16th annual Commissions for Charity Day, when celebrities act as guest traders and raise money for a range of causes.

With the help of other big names, including Bill Clinton and Shaquille O'Neal, BTIG raised more than $5 million.

McCarthy said she would love to see more celebrities use their public platform for good. "We already have the gratitude of having a blessed life for doing what we love so why not be more of service in this lifetime and find something that people desperately need and fill it," she said.

"Don't wait to have the cause happen to you in your life, go ahead and pay it forward."

For Mother's Day, McCarthy said she is planning on a day with Evan, now a teenager.

"My son thinks that Mother's Day means that he gets to tell me whatever he wants to do so I let him have that rule," she said. "I make it his day too."