The conversation is getting louder. Traditionally, American families have had to go it alone with a new baby. However, paid family leave is starting to gain traction in the U.S. due to employee demand.

And one of the biggest negative beliefs about paid family leave — that it is a burden on business — may not be true.

It's one of the most common arguments against widespread adoption in the U.S.

Under the Family and Medical Leave Act, about 20 million leaves are taken each year — and one-fifth of those are used by families with a new child, according to the Society for Human Resource Management.

The Family and Medical Leave Act allows new parents to take up to 12 weeks off from a job, but it guarantees only that they'll have a job to return to. The act doesn't mandate any salary during that time.

More than half of people surveyed said an unpaid leave for family or medical reasons would mean serious financial hardship, according to a September survey by the National Partnership for Women and Families.

It's a critical issue that isn't going anywhere. 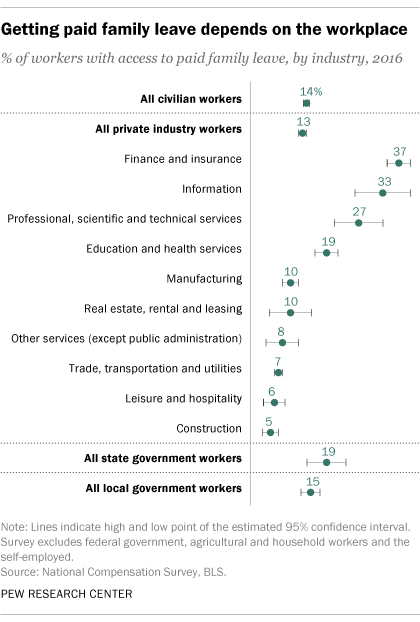 Even before the Family and Medical Leave Act was enacted, small-business owners "often allowed employees time off without the government telling them how to do it," said Molly Day, vice president of public affairs at the National Small Business Association.

Most of the association's members — 83 percent — already have some kind of paid sick leave, according to Day, with the majority offering 11 days or more.

The administration of the existing law has been a problem for businesses. "Paperwork and legal requirements have overwhelmed small-business owners," Day said.

It's not that business owners are indifferent to the needs of their workforce. "As small-business owners, our members often employ family members, neighbors and friends," Day said. "They understand the value of providing those employees paid time off."

The problem is the increased paperwork and reporting requirements that crop up in the wake of government involvement regarding "something they're already doing," Day said.

On one hand, businesses are concerned about the potential administrative burden, with employees missing weeks at a time and the need to 'on-board' replacements for short periods of time.

On the other hand, some employers favor paid leave because it boosts retention. In the long run, this saves on the expense of employee training.

Common assumptions about the impact on business are increased costs and the administrative burden. These are mostly baseless fears, according to the New York State Paid Family Leave Coalition.

The benefit will be yet another expense

Paid family leave benefits can be fully absorbed by small employee contributions, with zero out-of-pocket contributions by employers to pay for benefits. And because employers aren't paying the wages of the employee on leave, the money can be used, if necessary, to pay any temporary replacement costs or overtime.

Bottom lines will take a hit

Paid leave is a burden on small business

Small businesses that cannot afford the same generous family leave benefits as larger companies are at a competitive disadvantage in hiring. When these smaller companies offer paid family leave through an employee-paid program, it levels the playing field.

Paid leave will be an administrative hassle

Under the New York plan that started earlier this year, for example, there are no substantial new administrative or compliance requirements for employers. Instead, the program builds on the existing disability insurance infrastructure that dates from the 1950s.

More from Personal Finance:
Take five minutes to do this. It may just get you hired.
Want to win at 401(k) investing? Try a less-is-more approach
Difficult bosses can be managed with this simple HR secret strategy