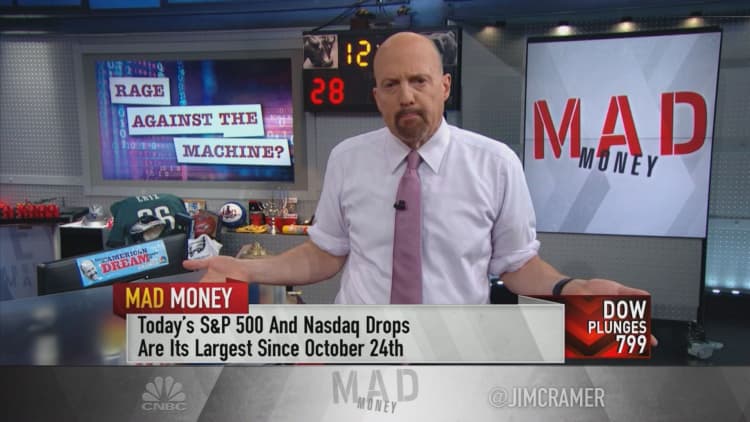 As CNBC's Jim Cramer watched stocks nosedive in Tuesday's trading session, one thing became abundantly clear to the longtime market-watcher: it "was all about the rise of the machines."

The major averages all fell more than 2 percent as a possible slowdown signal in the bond market and lingering trade fears rattled investors. The Dow Jones Industrial Average fell more than 800 points intraday.

Some attributed the dramatic declines to a lack of buyers, but Cramer already knew the culprits: complex algorithmic programs set up by professional money managers to sell when the odds of future market losses increase.

In other words, when an event that often precedes a recession occurs — in Tuesday's case, short-term interest rates trading above long-term rates in a so-called yield curve inversion — some trading algorithms will automatically begin selling securities because the chances of an economic slowdown just got higher.

Cramer, host of "Mad Money," drew a comparison with football. Some plays can seem very risky, but when you consider the percentage chances of them going right, there's no choice but to implement them in the field. These programs make the same kind of calculation.

So, when the two-year and the five-year yield curves inverted on Tuesday, some hedge funds' programs automatically sold the , which tends to fall in times of economic weakness, and others automatically sold shares of the big banks, which suffer when long-term rates are lower, Cramer said.

"Why? Because historically, this situation has produced negative results for the bank stocks and these hedge funds are trying to get out ahead of others who fear those negative results but just don't know they're going to fear them. It's a footrace," he explained. "This curve, as they call it, overrides whatever you hear about good employment or consumer balance sheets or robust lending. It's predictive."

Worse, the charts are signaling more pain ahead: based on Cramer's analysis, many hedge funds likely sold the S&P 500 when it dipped below its 200-day moving average because, in the past, that move tended to bring more downside.

"Here's the problem: there are now so many hedge funds using the same algorithm, same programs [that] there simply aren't enough investors willing to take the other side of the trade. If we all know that stocks go down on certain triggers, then who the heck would want to buy stocks?" Cramer said.

"That's how you get a day like today, where the market goes into free-fall," the "Mad Money" host continued. "When the percentages are against you and the algorithms are in charge, ... nobody wants to try to be a hero and bet against them." 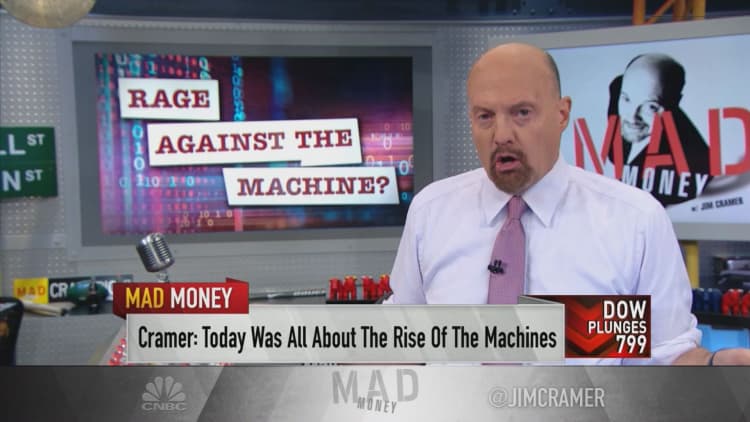