Shares of Mattel jumped as much as 20% in extended trading Tuesday after the company posted better-than-expected earnings for the third quarter and announced it would be hiring a new chief financial officer.

The company also said auditors had completed their investigation into allegations that the company had made accounting errors in historical periods.

The company will amend its 2018 annual report to restate its financial results for the third and fourth quarters of 2017 and said it would work to identify weaknesses in its internal control over financial reporting.

The whistleblower letter had been made public in August as Mattel was nearing a sale of senior notes due in 2027. Shares fell sharply as investors reacted to Mattel having to halt the bond offering.

By wrapping up the investigation without finding any fraud, Mattel can now go back and do a new bond offering,

"We plan to return to the debt market to refinance the $250 million of senior notes maturing in October 2020," CFO Joseph Euteneuer said during the earnings call.

Also on Tuesday, the company said Euteneuer would step down from his post after a transition period of up to six months. Mattel is now conducting a search for its next CFO.

"Joe has been a valued member of our leadership team since joining Mattel two years ago," Ynon Kreiz, chairman and CEO of Mattel, said in a statement. "He has played a key role in our structural simplification program which is nearing completion, and made meaningful contributions to the significant progress we have made in the first phase of our strategy to restore profitability."

Revenue rose to $1.48 billion, beating the $1.43 billion estimate analysts had forecast, according to Refinitiv.

The earnings beat is good news for Mattel, which has been working on a strategic turnaround plan since bringing Kreiz to the helm in 2018. Still, brands like American Girl and Fisher-Price continue to weigh on sales.

While sales of Barbie were up 10% in the quarter, American Girl sales fell 14%. The company's infant, toddler and preschool category also saw sales slump 11%.

Action figures, building sets and games saw combined growth of 12%, the company said. And the vehicles segment rose 13% during the quarter, with sales of Hot Wheels up 25%.﻿ 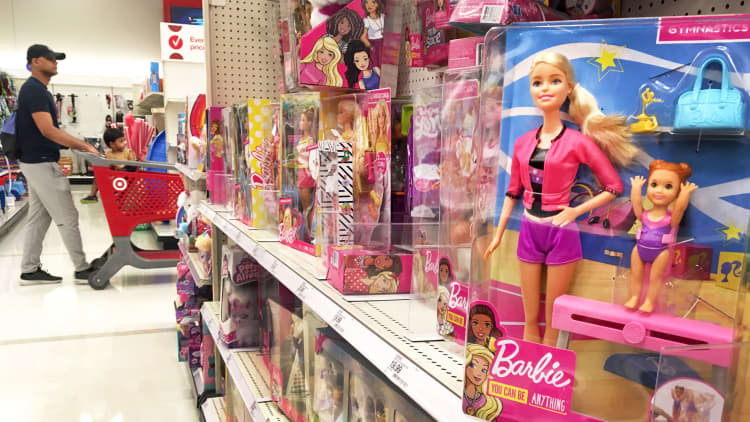 Correction: Mattel plans to search for a new CFO. An earlier headline incorrectly stated a replacement had been found.