Bernie Sanders thinks Joe Biden is a "decent guy." He just believes the only person now capable of denying him the 2020 Democratic presidential nomination is wrong about, well, a lot of things.

After the Super Tuesday primary results set the Vermont senator and former vice president on a collision course in the race to take on President Donald Trump, Sanders contended Wednesday that Biden had much to "explain" to American voters. From trade deals to the Iraq War, the health-care system and the social safety net, Sanders aimed to draw distinctions between his record and Biden's.

He framed the next phase of the Democratic primary as a fundamental question of, "which side are you on?" He cast Biden as beholden to billionaire donors, questioning whether a candidate backed by the "corporate world" would bring about changes working families "desperately need."

"The American people have got to understand that this is a conflict about ideas, about a record, about a vision for where we go forward," he told reporters at his Vermont campaign headquarters. He insisted he does not want the campaign to "denigrate into a Trump-type effort" riddled with "personal attacks."

Welcome to the new Democratic primary, the result of a whirlwind few days where Biden swiftly stacked up support as centrist alternatives to him fell to the wayside. As a two-person race develops, Biden has cast Sanders' sweeping proposals as too much of a risk for a party that has one chance to deny Trump a second term in the White House.

Biden leapfrogged Sanders for the pledged delegate lead on Tuesday as he dominated in the South and won key states such as Texas, Massachusetts and Minnesota, according to NBC projections. Sanders kept pace by racking up an early delegate lead in California, though the most populous U.S. state's primary was still too early to call Wednesday afternoon.

Biden held an overall 513 to 461 pledged delegate lead as remaining results trickled in Wednesday, according to NBC News. 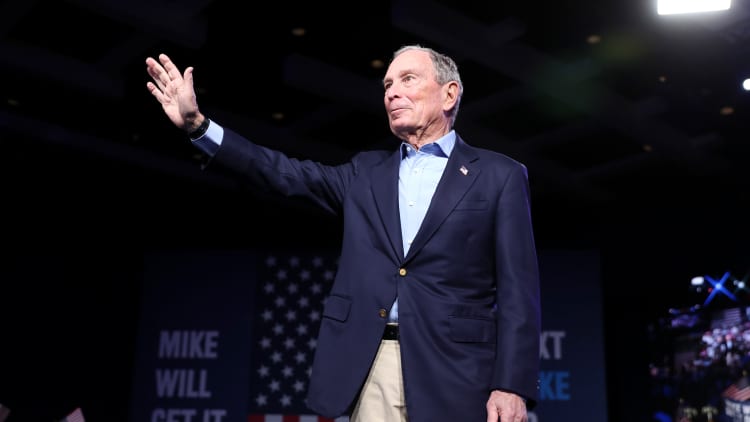 After seeing little return on a $500 million campaign investment, former New York Mayor Mike Bloomberg dropped out of the race Wednesday and endorsed Biden. Sen. Elizabeth Warren also struggled in the 14 state primaries Tuesday as Biden and Sanders sprinted ahead of their rivals in the pledged delegate count.

The race has been flipped on its head since late last week, when Sanders hoped to charge to at least a plurality of delegates and leave behind a struggling Biden. But the former vice president's South Carolina primary win, followed by his centrist rivals' decisions to drop out and endorse him before and after Tuesday, helped to reset the primary.

He will run those ads in critical states including Michigan, Florida and Illinois that hold nominating contests on March 10 and March 17.

Sanders addressed both Warren's and Bloomberg's plans on Wednesday. Warren was mulling her next steps in the race after Tuesday's disappointment, which included a third-place finish in her home state of Massachusetts, according to NBC News.

Sanders said he spoke to his Senate colleague earlier in the day. She told him she is "assessing her campaign" and has "not made any decisions at this point," according to Sanders.

"She will make her decision in her own time," the Vermont senator said.

As for Bloomberg, Sanders appeared surprised at the news he dropped out of the race. But he characterized a political and corporate establishment nervous about his rise and taking steps to "stop Bernie Sanders" and a "movement of working people and low-income people."

He pointed to the fact that U.S. stock indexes, fueled by health-care companies, rose after Biden's success on Tuesday. Sanders' proposal to end the private insurance industry has worried health-care investors.

"I suspect we will see a lot of money coming into Biden's campaign, probably a lot of negative ads attacking me," Sanders said of Bloomberg's effort to back his rival.

While Biden certainly has an array of wealthy donors, he has his own working-class supporters. In Texas, the site of perhaps Biden's most important Super Tuesday win, the former vice president got 35% of support among people with no college degree versus 32% for Sanders, according to exit polls.

A Biden campaign spokesman did not immediately respond to Sanders' criticism of Biden's record.

Sanders also did a bit of soul searching on Wednesday. He acknowledged the challenges in one of his campaign's core goals — boosting turnout by mobilizing infrequent young voters.

Younger Americans typically cast ballots at a much lower rate than their older counterparts, who largely supported Biden on Tuesday.

"Have we been as successful as I would hope in bringing young people in? And the answer is no, we're making some progress," he said, predicting better success in the general election.

"It is not easy," he said of mobilizing young voters.