If you're considering a new job, "there's no time like the present," said Daniel Zhao, senior economist at job-hunting website Glassdoor.

Median annual base pay for full-time workers rose to $52,672 in February, according to the latest pay report from Glassdoor.

However, the government shutdown, market losses, geopolitical uncertainly and weakening effects from the 2017 tax cuts are contributing to headwinds, which are starting to slow down wage growth, Zhao said.

February's base pay was up only 1.3 percent from last year and wage growth in January was revised down to 2 percent from 2.3 percent, Glassdoor found.

Indeed, wage growth has been sluggish throughout the economic expansion, struggling to break 3 percent despite the tight labor market. Yet the most recent deceleration is "a little bit concerning," Zhao said.

"Weakening pay growth is a warning sign for the labor market as we dig into 2019, but time will tell if this downward trend will continue."

High-end job positions, such as data scientists, are seeing some of the greatest wage declines, Glassdoor found, mostly due to more people entering the field.

On the flip side, low-wage positions, such as cashiers and bank tellers, are notching some of the largest wage gains, according to Glassdoor, largely because of increases in the minimum wage.

Overall, "this is still a good time for workers to look for a new job," Zhao said. "If they can find a job that fits them and pays well, they should go for it." 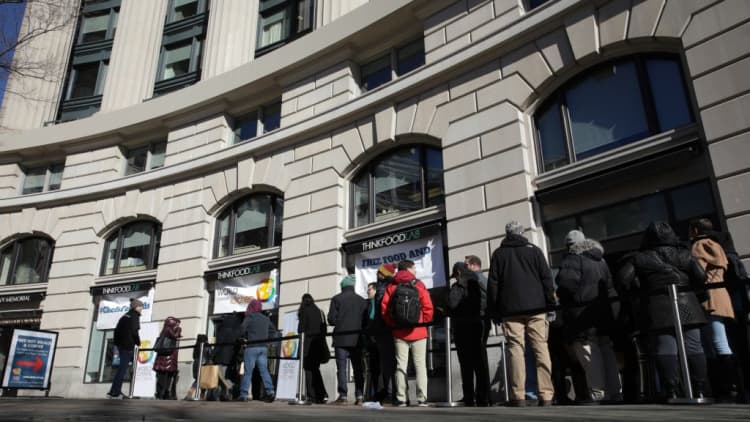 Across all skills levels, about one-third of workers are looking to change jobs in 2019, down from 40 percent last year, according to CareerBuilder's annual study on the state of the labor market.

There has already been some evidence of a spike in people looking for work: The number of Americans filing applications for jobless benefits increased more than expected last week and the number of people on unemployment rolls rose to a 10-month high.

Last year, there were more openings than there were people looking for jobs. The unemployment rate ticked up to 4 percent in January but is still not far from its lowest point in five decades, according to the Labor Department.

Still, half of all human resource managers also said they can't find qualified candidates to fill their open positions, which is about the same as last year.

To make the most of today's market, CareerBuilder identified the top three jobs in each state by wage category and the skills required to land those positions. (See the chart below.)

Although job seekers say factors such as location, affordable benefits, job stability, a good boss and work culture are more important than salary when considering a position, changing jobs is still a good way to give your income a boost, particularly in the face of stagnant wages.

People who switched jobs saw their wages rise nearly 4 percent, versus 3 percent for workers who stayed in the same job, according to an analysis of wage data from the Federal Reserve Bank of Atlanta.

"Be savvy in considering all of the factors that weigh in to employment decisions," said Michelle Armer, chief people officer at CareerBuilder. "That will increase your overall lifestyle satisfaction."

More from Personal Finance:
These states are raising their minimum wage
Here are the most in-demand jobs for 2019
If your job is 'boring and repetitive' watch out