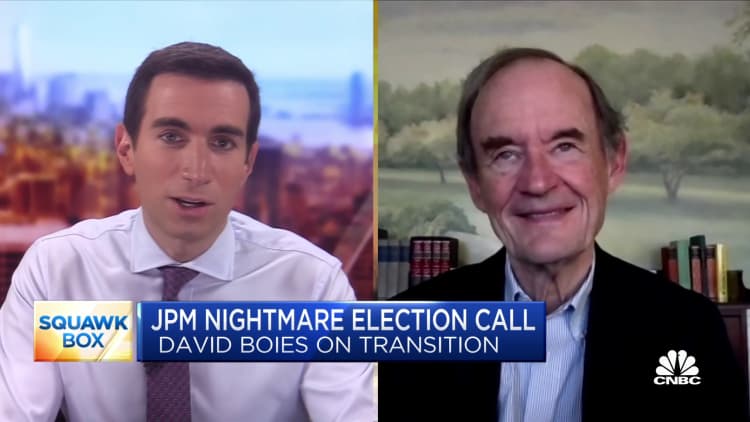 When Jan. 20 rolls around, President-elect Joe Biden will be sworn in, Boies said in an interview on "Squawk Box." Trump has refused to concede the race to Biden, despite numerous media organizations including NBC News calling the election almost two weeks ago.

"There is no way that Trump can overturn these election results," said Boies, chairman of the New York City-based law firm Boies Schiller Flexner. He has donated to Biden's campaign.

Trump's campaign has waged a flurry of legal fights in key battleground states related to the voting process or the vote counting. On Wednesday, it filed for a partial recount to challenge Biden's victory in Wisconsin. And on Twitter, the president has been falsely claiming he won the election and asserting — without presenting evidence — that rampant voter fraud occurred across the United States.

The president also fired a top federal cybersecurity official who had repeatedly defended the election's integrity. And as recently as Wednesday, in an appearance on Fox News, White House press secretary Kayleigh McEnany referenced a "second Trump administration" when discussing plans to combat the coronavirus pandemic.

The election results have not been finalized yet, and the Electoral College has yet to officially cast its ballots. That vote is set for Dec. 14.

Boies said he was confident there were no avenues for Trump to hold onto power beyond Inauguration Day.

"There simply is not a path — not a legal path, not a political path and, as I say, certainly not a military coup path — for President Trump to remain in office," Boies said. People can continue to speculate about what may happen, Boies acknowledged. "But even the speculation ends with the same result, which is President Biden being ... [inaugurated] Jan. 20."

Boies defended Trump's right to take election disputes to court, as his one-time client, Gore, did in the razor-thin 2000 election. Challenges to the results in Florida went all the way to the U.S. Supreme Court, which ultimately overturned a decision from the Florida Supreme Court that ordered a recount of the votes. Gore followed by conceding the presidential race to then-Texas Gov. George W. Bush.

Boies said he was concerned by Trump's efforts to make baseless claims of widespread fraud, describing them as an "unfortunate" attempt to undermine democracy. He recently authored an op-ed in The Washington Post alongside Bush's recount lawyer, Theodore Olson, that asserted there is a "clear outcome" in favor of Biden.

The difference between Trump's legal efforts in the 2020 election and the Bush-Gore race, they wrote, is that in 2000, it came down to just over 500 votes in a single state. This time, the margins in key swing states such as Arizona and Michigan are larger than that, according to Boies and Olson.

"Evidence of systemic or widespread fraud or miscounting in those states has simply not been found, and recounts rarely, if ever, change the outcome of elections by more than a few hundred votes," they wrote. "The sooner that Trump and his supporters accept the election result, the better it will be for the nation, Boies and Olson added.

The White House referred CNBC to the Trump campaign for comment on Boies' remarks. In a statement to CNBC, Trump campaign senior legal advisor Jenna Ellis said its "strategy remains focused on ensuring that every legal vote is counted and every illegal vote is not." 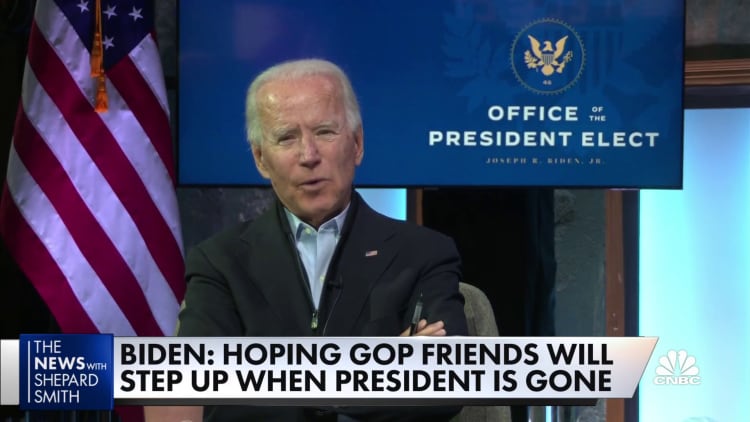 watch now
VIDEO1:0201:02
Biden hopes GOP will step up to coronavirus fight when Trump's gone
The News with Shepard Smith