Pfizer CEO Albert Bourla said Tuesday that his company has ramped up production of its two-shot coronavirus vaccine and will be able to deliver a total of 300 million doses to the U.S. ahead of schedule.

Bourla said on Twitter that Pfizer can deliver 10% more doses to the U.S. by the end of May than it had previously agreed to produce — up to 220 million from 200 million.

The company will be able to supply the full 300 million, which it had agreed to deliver to the U.S. by the end of July, two weeks early, Bourla said.

"In the fight against COVID-19, we're in this together," he tweeted.

The announcement came as dozens of states temporarily stopped administering Johnson & Johnson's single-dose Covid vaccine. The Food and Drug Administration advised them Tuesday to do so after six women in the U.S. developed a rare blood-clotting disorder that left one woman dead and another in critical condition.

Some states, such as New York, said they will use Pfizer's vaccine in place of the J&J shot for appointments that had already been scheduled. 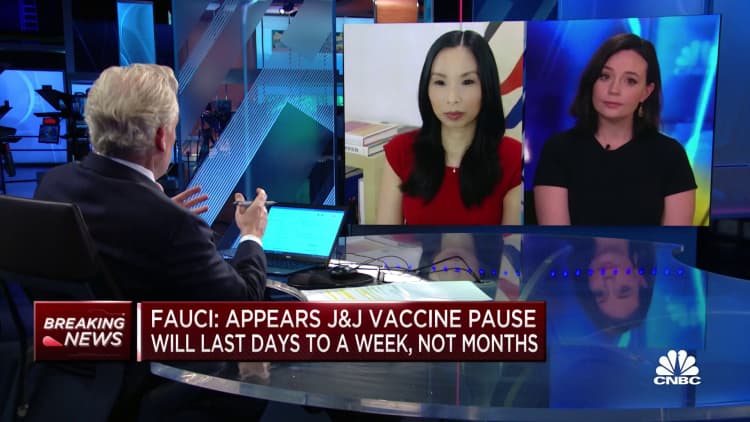 watch now
VIDEO5:2305:23
Why this analyst likes Pfizer and thinks it can step in if necessary for JNJ
The Exchange

President Joe Biden last month set a goal of getting enough Americans vaccinated in time for them to safely gather in small groups for the Fourth of July. He also vowed that every adult in the U.S. will have access to the vaccine by the end of May.

The Biden administration in February said that it had purchased enough vaccine doses from Pfizer and Moderna for each company to deliver 300 million shots by the end of July. The government's total purchase from Pfizer came to approximately $6 billion.

While the U.S. is vaccinating more people than ever, it is also reporting roughly as many new Covid cases per day as it did during last summer's surge. The nation counted an average 68,758 new infections over the past seven days, and cases are trending higher in numerous states, according to data from Johns Hopkins University.

Just over 20% of the U.S. population is fully vaccinated, according to Johns Hopkins. That's well below the 70%-85% threshold that Biden's top medical advisor, Dr. Anthony Fauci, says is required for the country to reach herd immunity and suppress the pandemic.