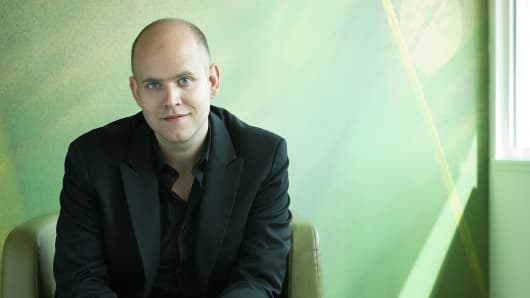 For about $10 a month, Spotify customers get an ad-free premium service that offers song selection and the ability to cache music for later listening on laptops, tablets and mobile devices. The free service — which features ads — offers unlimited listening and internet radio.

In February, Spotify announced that its service is now available on Amazon's Echo, the wireless speaker and voice-command device that responds to the name Alexa. Just say, "Alexa, play Billy Joel," when you walk into the house and you'll be hearing "Piano Man" in no time.

Spotify, and the music-streaming industry in general, faces criticism from artists like Taylor Swift, claiming they are being unfairly compensated. Artists are paid based on the number of streams downloaded through the service.

Spotify has raised $2.1 billion in venture funding from investors, including Technology Crossover Ventures, Coca-Cola and Fidelity Ventures, since it launched in 2006. Now the big question is when Spotify will go public. The company isn't saying, but a recent round of funding in the form of convertible debt (where Spotify pays interest on the money as long as it remains private) rather than equity suggests that an IPO will happen sooner rather than later.

The complete history of the CNBC Disruptor 50