Britain's new Finance Minister Jeremy Hunt opted to scrap most of the policies announced in Prime Minister Liz Truss's budget on Sept. 23, prompting gains in the pound. The U.K. currency was last seen up 2.1% at $1.1408, extending gains made ahead of the statement.

The pan-European Stoxx 600 provisionally ended 1.8% higher, with all sectors and major bourses in positive territory. Autos led the gains, up around 2.8% for the session.

Shares in the Asia-Pacific ended mixed on Monday as recession fears weighed on expectations of more monetary policy tightening around the world.

In the U.S., stock futures traded higher early Monday as investors awaited big earnings reports to roll in from Bank of America, while Goldman Sachs will release numbers Tuesday. 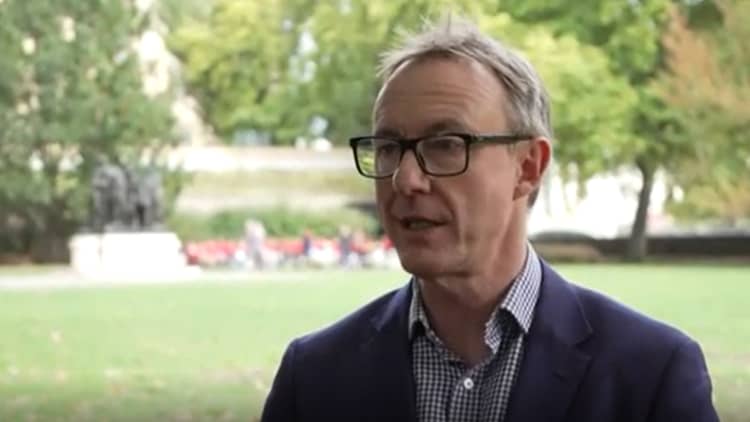 The U.K. government's attempt to introduce a swathe of tax cuts, which it today almost fully backtracked on after sparking chaos in markets, has caused long-term damage to the economy, according to a leading think tank.

"The markets were extremely unhappy about what the previous chancellor had announced, I think the government was pretty much forced into this scale of change," Paul Johnson, director of the Institute for Fiscal Studies, told CNBC's Arabile Gumede.

"There's undoubtedly a long-term damage [to the economy] because there's been more uncertainty created, there's lack of stability in policy. What you've seen the current chancellor do is try to reassert that certainty and credibility, but once that credibility is lost, it's very hard to regain. And the government is going all-out to regain it at the moment," Johnson said.

Across European stock markets, all sectors were in positive territory at 3:00 p.m. London time. The major German and French indexes were both up around 2.1%, while the U.K.'s FTSE 100 rose 1.3%. 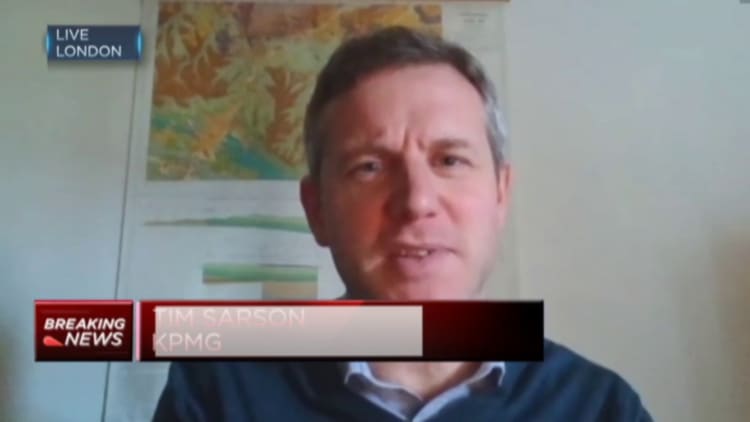 The package of tax cuts announced by Liz Truss's government on Sept. 23, which was almost completely reversed this morning, was an experiment in trickle-down economics that couldn't have come at a worse time, according to KPMG's U.K. head of tax policy.

"It was just the way that it was done, the lack of clear costing, the fact that it was being done at a time when government finances are being stretched by the need to support consumers from energy [prices], and a time when global interest rates and gilt yields are rising," Tim Sarson told CNBC's "Squawk Box Europe."

The yields on long-dated U.K. government bonds, known as gilts, have fallen during a statement delivered by British Finance Minister Jeremy Hunt.

"Almost all" of the tax measures announced will be scrapped, according to Hunt. The energy price guarantee will remain intact until April.

Shares in ITV are up 9.6% following a report by the Financial Times that it may be selling a stake in its production arm ITV Studios.

ITV Studios is one of the largest program producers in Europe and some analysts estimate it could be worth more than its parent company's £2.5 billion ($2.82 billion) market capitalization.

British investment platform Hargreaves Lansdown is down 4.4% following slowed earnings reports and news that CEO Chris Hill is stepping down. The company reported assets under administration fell during the first quarter of fiscal 2023.

The organization has also been hit by a multimillion pound lawsuit over the failure of one of its former fund managers, Neil Woodford.

The yields on long-dated U.K. government bonds, known as gilts, have fallen ahead of a fiscal statement by the new Finance Minister Jeremy Hunt expected later today.

Over the weekend, Hunt told BBC that he will show the markets that the U.K. "can properly account for every penny of our tax and spending plans."

CNBC Pro: Nearing retirement? How to allocate your portfolio right now, according to the pros

Despite the volatility in markets, asset managers say it's important to remain invested if you're nearing retirement.

But how should one allocate funds, bearing in mind unsettled markets, a shorter investing horizon and the need for retirees to have some liquidity?

CNBC Pro asks the experts for their views.

The People's Bank of China rolled over its medium-term lending facility (MLF) loans and kept its interest rate unchanged at 2.75%, according to a statement on its website.

The central bank announced it would keep the one-year rate unchanged for a second month and injected 500 billion yuan ($70 billion) through the MLF.

A Reuters poll expected no change to the MLF rate and a partial rollover of loans from the central bank.

Stocks worldwide have taken a beating this year, and major indexes remain deep in negative territory.

As investors weigh whether to sell or stay invested, CNBC Pro screened almost 1,500 large and mid-cap global stocks and found a number of major companies with sell or underweight ratings.

European markets are heading for a lower open Monday as investors focus on the next U.S. Federal Reserve meeting, which begins Tuesday. The two-day meeting will conclude with an announcement of the central bank's latest interest rate decision.

The investment bank named several stocks it believes will be most impacted in the next 3-6 months, and which could see downside to their share prices in the same period.