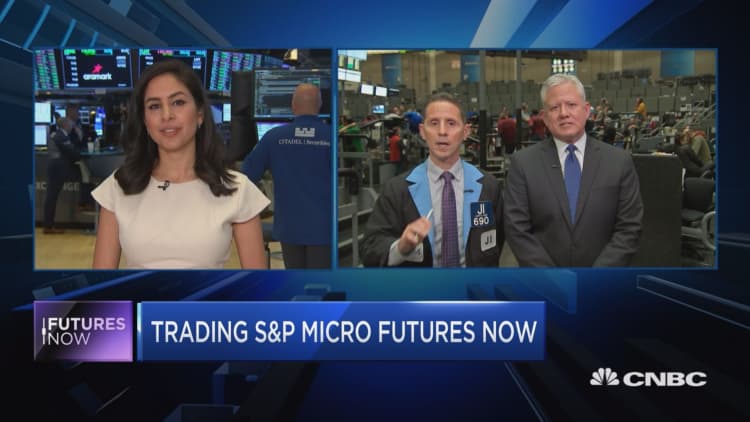 The yield curve's predictive power is waning, according to Wells Fargo Securities.

Many see yield curve inversions — when long-term rates fall below short-term rates — as precursors to a recession. The most recent inversion saw the 3-month Treasury bill's yield cross above 10-year note yields in the widest divergence since the 2008 financial crisis.

But if you take a closer look at what's driving the yield curve, it becomes clear why it may no longer be a reliable forecasting tool, says Michael Schumacher, managing director and global head of rate strategy at Wells Fargo Securities.

"From our perspective, you've got to break down the yield curve into a couple components," Schumacher said Thursday on CNBC's "Futures Now," calling the 1-year rate and anything shorter "essentially the Fed zone. The Fed's got that locked down. You can't really change a 6-month rate or a 1-year rate unless the Fed steps in."

When it comes to anything longer-term, however — the 2-year, 10-year and even 30-year Treasurys included — "it's a free-fire zone," the rate strategist said.

"The market's dictating those rates. They've been driven largely by trade, [and] maybe some other risk-off factors," Schumacher said. "But it's really that deviation between the Fed on the very front end and risk-off concerns on the back end. That's why the curve is inverted in our view, and that's why we think it's not really a recession predictor at this point."

As for 10-year yields themselves — which fell to a new 20-month low in overnight trading Friday after the Trump administration said it would place 5% tariffs on all imports from Mexico starting June 10 — "we still think that the bottom is near," Schumacher said in a Friday phone call with CNBC.

The strategist said he was surprised that rates didn't fall more drastically in the wake of the threat, but interpreted the muted move as a positive signal for markets and a sign that the Fed would have to change its tune for a more substantial decline to take place.

Still, the market's competing influence over the yield curve and the Fed isn't a new phenomenon, Schumacher said. Ironically, while media outlets like CNBC focus so heavily on the Fed's balance sheet, the central bank will likely "be really excited" when that chatter stops, he said.

As for the yield curve, "as far as a recession predictor, we think it's lost its mojo and it probably did about 10 years ago, frankly," he said. "The reason we think the curve doesn't predict is central banks, whether it's the Fed, the Bank of Japan, the ECB, their positions are so big [that] rates just get compressed on the back end. It's like that Wiley E. Coyote anvil from the cartoons years ago. It sits there and squashes long-term rates, and that's why we think the curve's so flat."

Investors trying to navigate this changing landscape would do well to remain "pretty conservative" for the time being, Schumacher advised.

Short-term Treasury bills would be a good place to wait out the uncertainty around U.S.-China trade ahead of President Donald Trump and Chinese President Xi Jinping's expected meeting at the upcoming G-20 summit, as well as Brexit and escalating U.S.-Iran tensions, he said.

"Stick in T-bills ... for the next few weeks, maybe a month," he said. "And then if you get the great big photo op at the G-20 [summit] and Mr. Trump and Mr. Xi shake hands and smile a bit, then probably the coast is clear to step in. But not yet."

Stocks dropped Friday to finish May in the red. Treasury yields stayed at low levels as worries around a multi-faceted U.S. trade war persisted.