Reasons why Rhode Island is moving up in business rankings: Gov. Raimondo

Because of that work, Rhode Island is on the move. Over the last two and half years, we went from having the highest unemployment rate in America to one that's lower than Massachusetts'. Private sector jobs are at an all-time high. Global businesses like General Electric and Johnson & Johnson are moving here, companies like General Dynamics Electric Boat and Virgin Pulse are expanding here and — for the first time in 30 years — Narragansett Beer is brewing here. 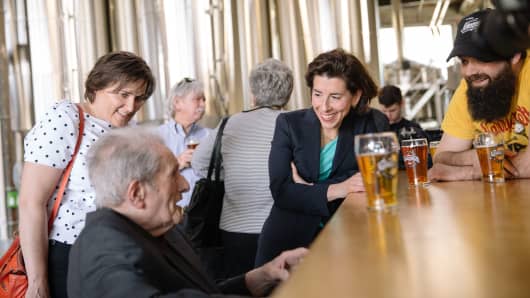 For years Rhode Island has been home to the nation's worst roads and bridges. Now, for the first time in at least a generation, we're finally making the necessary investments to fix our highways and bridges. For the first time in state history, we have a 10-year highway improvement plan that will rebuild and repair our roadways, putting hundreds of Rhode Islanders to work. We know in Rhode Island that infrastructure is more than just roads and highways. That's why we're also leading the way to encourage wireless providers to pilot their 5G technology in Rhode Island.

With support from the newly created Office of Innovation, Rhode Island is on track to be the first state in America to offer computer science in every school and in every community. Since I've taken office, we've made record investments in K–12 education. In part because of that, U.S. News recently ranked Rhode Island as the nation's 8th-best state for college readiness.

More from Top States for Business:
America's Top States 2017: Inside the rankings
The 10 states with the most solid infrastructure
The 10 best states in America to get an education

Two years ago, we completed a comprehensive effort to reinvent Medicaid. Those reforms lowered state Medicaid spending by more than $100 million without cutting eligibility or reducing benefits. Because of those savings, we've been able to invest in job training initiatives and workforce development partnerships with major employers like Electric Boat.

We're creating good, high-paying jobs in Rhode Island. Seven out of 10 of them require a degree or credential past high school, which is why we are taking bold steps to ensure Rhode Islanders stay competitive. Beginning this fall, Rhode Island will be one of just five states – and the only state on the East Coast — to offer tuition-free access to community college for every student in the state. The Rhode Island Promise Scholarship program will level the playing field and ensure that Rhode Islanders are prepared to compete for the jobs Rhode Island companies are creating.

Like every state, Rhode Island has its challenges, but we are responding to them in a way that is creating opportunity. While other states have had to cut the school week to four days and others are dogged by stories of major global companies moving to new states, Rhode Island is on the move and we've given businesses reasons to take a fresh look at the Ocean State.

Editor's note: This commentary was written before the release of the Top States 2017 data. The governor did not have knowledge of the rankings or the comprehensive data.

More From Top States for Business