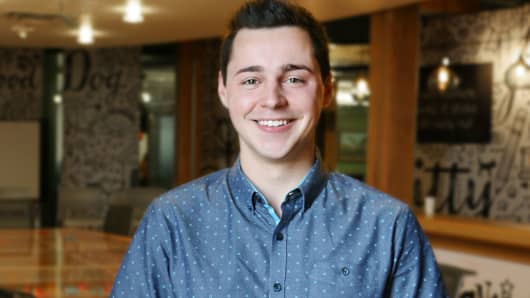 In 2013, when Zach Winkler was a senior at the University of Missouri, he heard plenty of stories about the crimes that were happening on campus but didn't hear enough about solutions. The blue-light poles on most college campuses that allow students to press a button to summon help were plentiful, but clearly not getting the job done. That's when he and three friends got together to create an app that students could activate quickly and quietly on their smartphones to call for help.

They named the app SafeTrek, and today it has more than 250,000 (mostly female, ages 13 to 24 ) users in the United States. Here's how it works: While walking to your car — or back home alone, for instance — a user puts her finger on the app's sensor and keeps it there until she arrives at her destination. Once there, she keys in a four-digit code signaling that all is good. If a user runs into trouble, she simply takes her finger off the sensor and SafeTrek notifies the police. By using the smartphone's GPS system, it also knows precisely where the user is located.

While the app was originally created for college students, anyone can use it. The app works on both iOs and Android operating systems and costs $2.99 per month. The company has raised $1.2 million from venture capital firm Cultivation Capital.