The Super Bowl is less than a week away, but brands have already started releasing their commercials for the biggest TV event of the year.

Fox, the network airing the 2020 Super Bowl, had sold out its advertising slots by November. Fox had been selling 30-second slots for as much as $5.6 million. The brands advertising in this year's Super Bowl game include Facebook, Snickers, Heinz, Pop-Tarts, Procter & Gamble and more. Viewers should expect some political flavor too, with Michael Bloomberg and Donald Trump airing their presidential campaign ads during the game.

Here are the Super Bowl commercials that have already been released. This list will be updated as brands release their official spots:

Alexa's 90-second spot with Ellen Degeneres and Portia de Rossi imagines life without the voice assistant. The spot explores what requests like "What's today's news?" or "Play that song I like" would have looked like in days of yore (or in a fantasy world).

Amazon Prime Video will air a 60-second spot for its original "Hunters" series, which will be about a band of Nazi hunters who have "set out to stop the Fourth Reich from rising to power in 1970s America." The show will be available on February 21.

Audi's 60-second spot features actress Maisie Williams, best known for her role as Arya in HBO's "Game of Thrones," driving an Audi e-tron and singing "Let It Go" from Disney's 2013 hit "Frozen." In the spot, Williams drives the zero-emissions crossover away from a crowded intersection of carbon-emitting vehicles with internal combustion engines

Avocados from Mexico's spot stars Molly Ringwald as a home shopping network host selling products for avocados, like a chip-shaped pool floatie or a personal carrier. The brand worked with Energy BBDO on the spot.

Bud Light is asking consumers to choose on social media between these two spots starring musician Post Malone. The winner will be shown during the Super Bowl. The spots, done with Wieden & Kennedy, promote the brand's new Bud Light Seltzer.

Budweiser's "Typical American" spot is meant to juxtapose "viral acts of humanity," like a protester hugging a policeman, with common negative labels placed on Americans. The spot was done with David Miami and directed by filmmaker Kathryn Bigelow.

Cheetos' spot gives new meaning to "Can't Touch This" with the help of MC Hammer and Cheetos Popcorn.

Coca-Cola's new campaign for its energy drink Coke Energy debuts during the Super Bowl. Coke's 60-second spot features Martin Scorcese waiting for a text message back from actor Jonah Hill, who needs a caffeine boost from Coke Energy before he can join the legendary director at a party. Hill hand-selected Scorcese to join him in the commercial, Coke said.

Discover's two 15-second spots, made with The Martin Agency, will run in the same commercial break during the Super Bowl with an ad running in between. Both feature a litany of pop-culture moments.

President Donald Trump released one of his two 30-second Super Bowl ads Thursday, hours after presidential candidate Mike Bloomberg released his own Super Bowl ad about gun control. Trump's campaign said the other 30-second ad will not be released prior to the game.

Doritos features Lil Nas X and Sam Elliott (with a cameo from Billy Ray Cyrus) as they face-off Western movie-style doing the "Cool Ranch Dance" as "Old Town Road" plays. The brand worked with Goodby Silverstein & Partners on the spot.

Hyundai-owned Genesis will be running its first Super Bowl ad this year, starring Chrissy Teigen and John Legend. The two throw a going away party for "old luxury," making way for the "new luxury" of the GV80 SUV. The spot was made with Genesis' agency, Innocean. The brand re-cut its original ad to remove the appearance of a stationary helicopter, following a helicopter crash Sunday that killed retired NBA superstar Kobe Bryant and his 13-year-old daughter Gianna along with seven others.

Google's 90-second "Loretta" spot tells the story of a man using his Google Assistant to help remember his wife. The commercial features the 85-year-old grandfather of a Google employee.

Heinz thirty-second spot was directed by Roman Coppola and made with Wieden & Kennedy. The spot ties together four stories, like moving into a haunted house or meeting a significant others' parents who are "evil super villains") that cut away to show "The reassuring presence of a Heinz Ketchup bottle."

Kia's spot features Raiders running back Josh Jacobs, who was homeless and sometimes living out of a car as a child, giving encouragement to his younger self. The spot introduces Kia's Seltos SUV.

The Super Bowl spot for Michelob Ultra Pure Gold, the brand's organic beer, tells consumers if they buy a six-pack of the lager a portion of sales will go to farmers transitioning their farmland to organic.

Microsoft's "Be the One"

Presidential candidate Mike Bloomberg's 60-second Super Bowl focuses on one of the biggest issues in his campaign: gun control. The spot, titled "George," features Calandrian Simpson Kemp, whose son George Kemp Jr. was shot and killed in Richmond, Texas, in 2013 at age 20.

Mountain Dew Zero Sugar's "As Good As The Original"

This spot, starring Bryan Cranston and Tracee Ellis Ross (in her first Super Bowl role), puts a sugar-free spin on "The Shining."

New York Life's 60-second spot is meant to celebrate the company's first 175 years in business and to kick off its "Love Takes Action" campaign. The spot describes four types of love recognized by the ancient Greeks, including "Agape," which it describes as "love as an action." The company says for its years in business it's been helping people act on their love.

The NFL's "Inspire Change" spot with retired NFL wide receiver Anquan Boldin, which premiered earlier this month during conference championship games, will run again as a 60-second commercial during the Super Bowl. Boldin tells the story about his cousin, Corey Jones, who was shot and killed by a police officer. The organization will also run another spot before kickoff.

Procter & Gamble skin care brand Olay's Super Bowl ad seeks to reach the NFL's wide base of female fans with its spot that features an all-female cast. The company worked with creative agency Badger & Winters on the ad, which is inspired by the first all-female space walk last year.

Pepsi's spot for its Zero Sugar version features Missy Elliott and H.E.R. performing a rendition of the Rolling Stones' "Paint it Black" (with a subtle reference to Coca-Cola's red cans and the Pepsi Zero Sugar cans' black exterior). The spot was done with Goodby Silverstein & Partners.

Jonathan Van Ness from "Queer Eye" (a self-proclaimed Pop-Tarts fan) stars in an infomercial-themed spot for a pretzel version of the toaster pastry. The brand worked with MRY on the spot, which will air during the second quarter.

Porsche will run its first Super Bowl spot since 1997 with a 60-second ad during the first quarter. The commercial will features a light-hearted car chase following someone stealing a Taycan Turbo S from the Porsche Museum in Stuttgart, Germany. The company released an extended cut of the ad on Friday.

Pringles spot this year stems from a partnership with Adult Swim's cartoon "Rick and Morty." The 30-second ad was made with WPP's Grey Group and will air during the second quarter of the game.

A thirty-second spot for Quibi shows bank robbers waiting for their getaway car — apparently, enough time to watch a short Quibi video. The streaming service is slated to launch in April.

An extended cut of the brand's spot for the candy bar jokes its Take 5 is "The best bar you've never heard of."

The spot for the candy bar celebrates the tenth anniversary of the "You're Not You When You're Hungry" campaign. Only this time, it's the world that's not feeling like itself. The brand worked with BBDO on the spot.

The maker of home seltzer machines released a one-minute version of its Super Bowl spot showing astronauts discovering water on Mars, prompting a celebration that quickly dies when someone ends up drinking the water after putting it in a SodaStream. Bill Nye and Alyssa Carson, an 18-year-old astrobiology student training to be part of the first crewed mission to Mars, are guest stars in the spot. The actual Super Bowl spot will run 30 seconds.

Squarespace's simple spot features Winona Ryder by the side of the road in Winona, Minnesota, making a website about, well, Winona. Apparently, this is the website.

TurboTax's tax-themed song explain the tax-filing process using the company's product. The company released an extended version of the spot, done with Wieden & Kennedy, Wednesday; a 45-second version will air during the second quarter.

Walmart is running its first Super Bowl ad, a sixty-second spot featuring space-adjacent elements like Buzz Lightyear and the USS Enterprise from "Star Trek," who are picking up curbside at the retailer. (The tagline? "Walmart Pickup. It's out-of-this-world convenience.")

This spot from WeatherTech features Scout, the dog owned by David MacNeil, the company's founder and CEO. Scout was diagnosed with cancer last summer and was treated at the University of Wisconsin School of Veterinary Medicine. The ad directs viewers to donate to the veterinary school via its website. 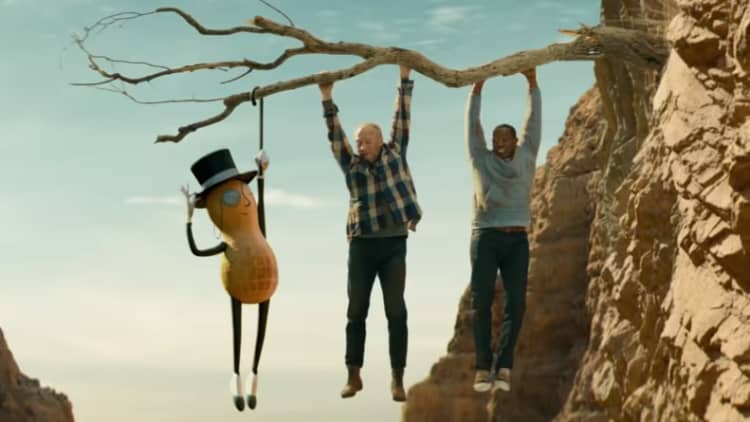 watch now
VIDEO1:4301:43
Planters has explained why it killed off Mr. Peanut—Here's why
News Videos